The garden is mostly in. The poppys are popping.. the sage is blooming and the wild lilac. We have had a dry spring with mild temps until the last several days of HIGH HEAT (100’s). Watching the clover yard dry up. The deer coming around less as there is less to eat. Haven’t seen the bambies yet, although we had a pregnant doe here for weeks.

Russel’s Aikido teacher from the bay area is here this weekend for a retreat. The potluck was last night and good food was had by all.
He is wrapping up the schools classes. In 3 weeks he will go to Aikido summer camp in the south bay for a week. I hope to have a lot of energy and maybe some money to do some interior work on this house.

The Michigan trip is booked for June 25 -July 11. Dad does have even more cancer. The melanoma keeps spreading, there are spots on his lungs which nothing can be done about, and a lump in his neck that is some kind of squamous, but not skin cancer kind. There is at least one more surgery ahead, if he chooses to do it. Probably just before we get there.

My friends T and Ter from Florida are actually saying they may come visit this way this summer. I am so hoping that they do. I need them too. I need to see T… just feels like it must happen.

Not a lot of photos to brag about. Haven’t been using my camera much. Got this one in april through the hazy kitchen window: 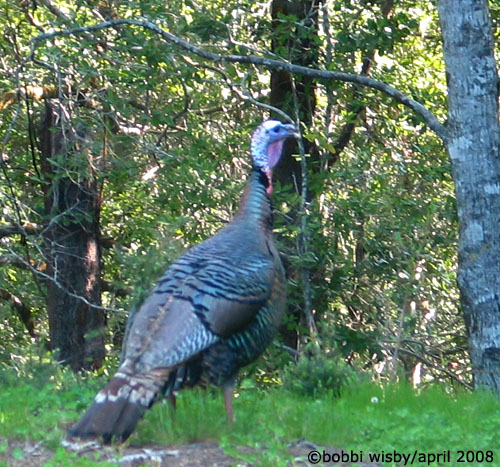 I have been working a lot.

And Bruce Cockburn, www.cockburnproject.net is out on a short tour which is being recorded and filmed for a new LIVE-Solo CD and DVD. Wish he was doing some shows on the west coast for this, but he’s not.

There is also a lot going on locally. Too much to really go into here, but here is a link to a local blog who keeps everyone informed at least to what is going on with code enforcement, diesel concerns, 2nd district elections and Reggae wars, to name a few. I use it only as a means to being alerted and seeing what some (few) people are thinking about these issues. I do not generally agree with a lot that is posted over there as opinion.