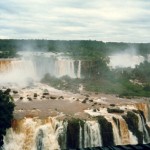 Shortly after that I received a bit of money and as I already had the travel bug, took it as a sign to go to South America.
I had friends in Argentina, so I landed there and spend some time in Buenos Aires then traveled north up to the Misiones district and to the Falls Iguassu, which border both Argentina and Brazil.

We then took a train into Paraguay and then flew into Bolivia.
We spent a month traveling all around Bolivia. I fell in love with the mountains and textiles, I brought home many.
We also visited the Valley of the Moon, Lake Titicaca, and the city of Tiwanaku (also spelled Tiahuanaco) which was the capital of a powerful pre-Inca civilization.