Feels great to be leaving southern Humboldt and its’ June-uary weather of cold rain, to points south.
Napa is about a 5 hour drive from our home, plus stops along the way. We drove into some warmer and partly sunny weather which really helped my mood. 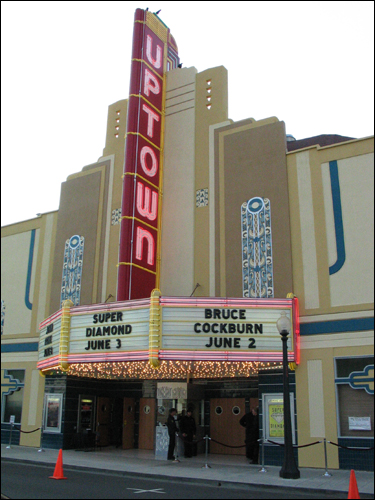 Napa was having an outdoor market that encompassed about 4 blocks in downtown just outside our motel and a couple blocks away from the Uptown Theater. After checking into our room we strolled a bit to get the driving feeling off us and got a bite to eat.

I mostly look forward to standing in line before shows as it is a great way to meet people and see other Humans and connect with Bruce fans.
The Uptown Theater has reserved seating which makes that not necessary, but we strolled over to the venue early any way.
On the way there a familiar face was walking towards us … I stopped Gary Craig .. he was s bit surprised, “Do I know you?” .. “No, but I know you!” And we did a minute of “I love your drumming and had hoped to meet you one day”, and he was off to buy some wine.

The Uptown is a beautifully restored theater. The seats are comfortable and we had great seats, about 5 rows back and center. I personally prefer not to be down in front as looking up tweaks my neck. It holds about 800, but only sold about 450 seats, if that.

The stage set up was spread out as others had mentioned, but as I watched the show it seemed to me that each player expanded to fill all that space!

I won’t go into song by song, but some of the highlights for me were Tokyo. Why? Well believe it or not it was the first song I ever heard by Bruce. There’s a whole story around that that and I will link to it later. But I love it. Call It Democracy is also a favorite it did not disappoint.

There were times that Jenny Scheinman just blazed .. blew me away really, as I usually am so riveted by Bruce that I barely notice what else is going on, but she demanded attention. Arrows of Light was a perfect example of that. It was as if she was channeling that light and her and her instrument became one, it was so tight and so intense. Bruce was so into her playing, really smiling and enjoying letting her have the spotlight. Wish I had a recording of this show.

Gary Craig is a joy to watch .. it’s as if he is massaging his drums or what ever percussion instrument he is using. The first time I saw him with Bruce was during the Bruce, Julie and Gary trio touring in 2006, I saw him at the Mystic in Petaluma and at the Great American Music Hall in SF and he impressed me so much. He is just so good with Bruce.

The whole show was really heart felt and and the crowd was very supportive, which I was glad of, and I wasn’t the only one whooping it up 🙂
I do believe the balance was off, as there were times I couldn’t hear Bruce singing as clearly as I am used to, and Jenny (violin) seem too loud sometimes, but I was also hearing these older songs being played in a new way, and I am sure that lent a bit to that.

I wanted to hear Iris (which he did do in Arcata last year so I have heard it live), but that was missing from this show. I also wanted to hear Lois, but that also wasn’t played tonight. Comets of Kandahar was haunting. Last Night was a perfect opener, Mighty Trucks and Waiting for a Miracle were real surprises.
And I really liked Boundless, it’s the only song he played that I haven’t learned all the lyrics too! 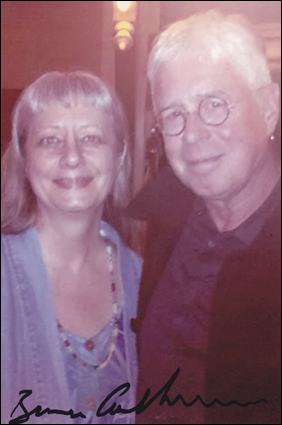 One thing that I noticed is that all the ‘usual’ people I would see at shows, say at the Mystic in Petaluma, or up at Solfest, or down at GAMH were not here in Napa. There was not one person I recognized in the audience, and I really can say that has never happened before in all the shows I have been too. But of course I did meet a few new interesting fans.

The Uptown Theater security was in full force. My bag was checked several times. Mostly looking for alcohol being brought in.

We were toward the end of the line for the meet and greet, wish now we had been last. The security people were really hustling the people through the line, it was not really casual at all.

As I approached for my 15 seconds, Bruce surprised me by getting up from his seat and coming out to hug me!! What can I say, love that. It was a good heart hug too 🙂
I had a photo of the 2 of us from the Arcata show that he signed. I didn’t really get to talk to him, as security was pushing us along.
But the hug made up for all the words that could of been spoken.

When we got to Jenny and Gary, I was pulling out the ticket for Gary and Jenny to sign, and talking with Gary a bit, and Russel was talking with Jenny.
We are from the same general area in northern California (southern Humboldt County), and her and Russel were comparing who they both knew.
Then we were swept away, and I didn’t really get to say anything to Jenny.

And there were no pictures taken, this time 🙁

I am looking forward to seeing Bruce again and solo this time at the Kate Wolf Music Festival coming up June 26. Maybe we will get the chance to connect, I hope so.

Last Night of the World
Mango
Lovers in a Dangerous Time
Tokyo (with Jenny on mandolin)
Mighty Trucks of Midnight
Ancestors (singing bowls)
Pacing the Cage
Boundless (using those huge chimes)
Strange Waters
Bone in My Ear (charango)
Parnassus and Fog
Call Me Back
Littlest Prisoner (Jenny’s song)
Call It Democracy
Each One Lost
Wondering Where the Lions Are
Arrows of Light (Jenny became a conduit of light on this song – it was amazing how she and her instrument were one..totally awesome
—
Encore: