Reggae on the River…is in a new location. I had bought tickets for Reggae and Bruce knowing I would miss one or the other. Reggae lost, I was there briefly on Friday before going to the city to see Bruce Cockburn. I didn’t really like the new layout or space, more on that at a later time.

I was fried from the week end and drive home on Sunday, but determined to go see Michael Franti at Reggae. I got to the site about 45 minutes before he came on and stood about 20 feet back from the stage (in the pit) waiting. Although I have been at shows where he has performed in the past, I have never actually ‘seen’ him in daylight… what a treat. 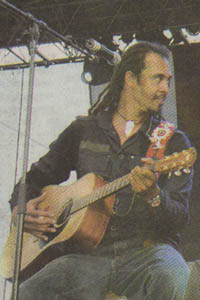 (this photo from newspaper so not too good)

The pit filled up with thousands of people, but I still had a good view. Michael is a power-house of energy, jumping, jumping jumping.. and engaging the audience constantly. Spearhead, his backup band is awesome as well. His new cd, Yell Fire has many great songs on it and he performed most of them. I was jumping and grooving and dancing and singing and was surprised I could keep going. But it was so good to see him so close.