It’s been so long since I posted.. don’t know where to begin!
Guess I will go backwards, as it is freshest in my mind 🙂 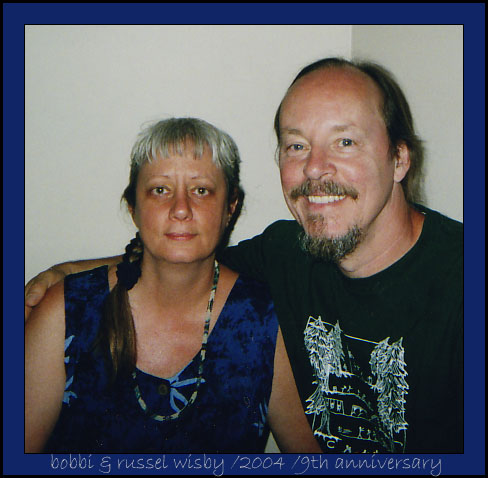 We had our 9th wedding anniversary on July 27, we have been together 13+ years though. Nice dinner at local Mateel Cafe with Russel’s sister Carol who is visiting from South Carolina.

The day (Monday 26) before our anniversary, part of my front tooth broke off! Yikes.. it was easier to deal with (fill) than I thought it would be. Helps if you just don’t leave the dentist office until it’s fixed *lol*. The 28th I had a dental cleaning..oh joy..2 mornings spent in the dentist office.

Meanwhile, we are trying to entertain Carol, which mostly amounts to eating out, and it’s been 100 degrees here for a least a couple of weeks.

We are still working hard at the house, and believe it or not, I am still painting! Down to 1 room, the living area, I am working on the catherdral ceiling with a light yellow paint. Threw my back/hip/sciatic out on Saturday, was down with that for a few days.

Managed to finally have a visit with friend Pam too.

The week before this we went to Eureka to pick up out Toyota truck which had been in the shop for 1 week getting a new engine (we got to drive a new 2004 Jeep suv..pretty nice ride). We actually took it to the bay for yet again another VA appointment for Russel who finally got a broncostmy… which still shows nothing to point to all the pain/congestion and need for steroid inhalers to hold that at bay. I will talk more about that trip another time..just too much to say.

I have more but gotta go help Russel with the upcoming Reggae on the River Aikido Burrito booth scheduling fiasco…more about that later too.

Bruce Cockburn - Each One Lost

The legendary Canadian singer-songwriter Bruce Cockburn came by the KXT studio for a chat and performance prior to his Kessler show.
View on Facebook
· Share

WHEN BRUCE COCKBURN and his wife Kitty drive about the Canadian country-side and into the cities in their camper-truck, bound for Cockburn’s singing engagements at colleges and in coffeehouses and on television programs, they take as their constant companion a large, bounding, handsome, part-lrish...
View on Facebook
· Share