Russel has been profiled this December by his Aikido Association – www.ai-ki-do.org. This is the profile: 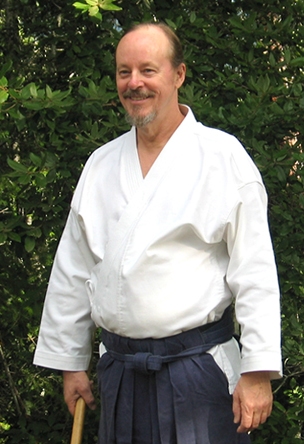 In 1974 I took a defensive tactics class at the College of the Redwoods in Eureka. I was looking for a self defense class and I had no idea what to expect. The instructor was a Hawaiian named Richard Kahoali, a student of Koichi Tohei Sensei. He taught some Kempo but mostly Ki Society Aikido. I found myself becoming more grounded and empowered almost immediately. I was struck by how powerful Kahoali Sensei could be while at the same time being kind.
In 1982 Tom Moreland Sensei, started classes in Garberville and I trained with him until early 1983 when he stopped teaching for health reasons. He suggested that I check out Tom Read Sensei’s classes at North Coast Aikido in Arcata.

Read Sensei is a remarkable Aikidoist. He studied with Hikitsuchi Sensei in Shingu and went on to develop his own unique way of Aikido. This was my first taste of Aikikai Aikido and I really liked it.
The first ten years of my Aikido training were sketchy at best.
The call of the wilderness was strong in me. I bought land in Southern Humboldt County in 1977. Distance and circumstances kept me from training more than two years spread out over a ten year period. The only classes available locally at that time were Wing Chun, Karate and Tai chi. So I dabbled in all of them. None of them could compare with the experience of Aikido.

In 1985 Doug Knox, who was Tom Read’s chief student, moved to our area and started Mateel Aikido. Now, finally, we had local, regular classes with an able instructor and the possibility to progress.
In 1986 Knox Sensei moved to Oregon and Carl Tissol Sensei became Dojocho of Mateel Aikido. Carl had trained for a long time with Tom Read and was very influenced by his Shingu roots.

In January 1993 I received my Shodan from Read Sensei. He had numerous Gasshukus and this was my first exposure to other Aikikai instructors including Frank Doran, Mary Heiny, Jack Wada, Richard Moon, Terry Dobson, Linda Holiday and others.

Tissol Sensei encouraged us to go to Seminars and Summer Retreat at San Rafael to broaden our perspective of Aikido styles. Summer Retreat provided the opportunity to learn from top notch instructors, primarily Frank Doran, Robert Nadeau, and Hiroshi Ikeda Senseis. And there were so many fantastic guest instructors and morning class instructors that it would take too long to list them all.

In 1994 Carl stopped teaching and Forrest Kan and I became the Dojochos of Mateel Aikido. We had maintained our connection with Read Sensei’s Association of Independent Aikidoists, but as time went on we were more and more drawn to the teaching and style of Frank Doran Sensei. In 1997 we became official members of the Aikido Association of Northern California Division 2. Since then we have been inspired by Doran Sensei’s sage counsel and guidance.

We currently have about a dozen regular students. Some classes there are only six or eight of us. The highest number of students we have ever had in twenty one years of classes is twenty three. We have classes every Tuesday and Thursday night at 6:30 and every Sunday morning at 10:30 at our local Veterans Hall in Garberville.
The wonderful thing about living in a small country town is that you get to see the same people over and over again every time you go to town. So you get to know more people. A trip to the store becomes a social event. And likewise in our dojo we have seen and trained with the same people for years. Everybody in the dojo knows everyone else. Really well! So there is a strong sense of family.
Sixteen years ago I started a kids program with the intention of increasing our adult school population over time. But small town kids usually move away when they get out of school since there are no serious career options here.

Nevertheless I still teach kid’s classes twice a week at the Community Center in Redway at 4pm on Mondays and Wednesdays.
I also teach classes at four local schools throughout the week. Mostly kindergarten to eighth grade. At the busiest time of the school year I have seventeen kid’s classes and 150 to 160 students .

My most Memorable Aikido Experience

It would be so hard to pick one particular Aikido memory because there are so many.
It could be Doshu’s visit, or
A weapons class with Pat Hendricks or Danielle Smith, or
A quiet moment with B. J. Carlisle, or
A mind stretching realization in one of Nadeau Sensei’s energy classes, or
Being chastised by Doran Sensei in such a tactful and gracious way that if you weren’t paying attention you wouldn‘t even know it, or
Experiencing an almost hallucinatory shift in the light in Read Sensei’s class, or
Getting brutally honest feedback from an eight-year-old in kid’s class, or
The countless daily realizations that I am applying an Aikido principle to some seemingly mundane action, or
Any one of dozens of wonderful moments with a long list of generous and patient instructors I have been fortunate enough to meet.
I am deeply grateful to each and everyone of them.

But if I had to pick just one it would be my first Gasshoku in 1975 were I saw my first high ranked Aikidoist and student of O’ Sensei, Koichi Tohei teach. He was awesome.