Bruce is back from Iraq, and you can start reading about his trip, Interview by Mike Ferner and Interview by Bob Doran.

He is also back out on tour, this time touring with Julie Wolf. I am so excited!!! 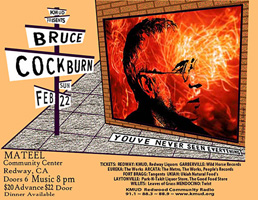 Bruce will be here in Humboldt County at the Mateel Community Center on February 22, 2004 as I stated here.
Check out some POSTERS for this gig from KMUD.

I have been listening to a live show from Hamilton Place, for more info on how to get live shows, check out BC-LIVE, which just rocks.

Bruce had been playing this song a lot in concert, although he wrote it in 1985, it is still as timely as it was then.

And They Call It Democracy